I was lucky enough to pick up a Steamdeck, and it turns out that there’s a lot of curiosity about it. I get a lot of questions! We all have our own desires and thoughts about what a device like this is and should do. I’m also perhaps not a “typical user”. Disclaimer: this is not a review, but a write-up on the Steamdeck from my perspective, and how it aligns with what I’m looking for.

TL;DR: The Steamdeck is a well-built, general purpose PC masquerading as a game machine. Battery life is not great. The general use game machine is well done, but not perfect. The dig-under-the-hood options are far less polished, and you’ll need external peripherals to make the most of it.

The Steamdeck is a little bit of a different kind of hand-held game console: It’s a full-featured computer running Linux. It boots into SteamOS and lets you access your Steam library. If you don’t want to see any of the underbelly, you never need to. This is the “intended” use, and as-is, works admirably. There is one twist, however: since it’s running Linux, and not Windows–which most developers target with their games–it needs to use a little magic to overcome that.

This magic comes in the form of Proton, a modern WINE developed and maintained by Valve specifically for the Steamdeck. This widens the library of titles that the Steamdeck can play. It works admirably, but not all titles are compatible.

With all of that said, what fun is using a device for its intended purpose?

First: the build quality is excellent. It’s a solid device, with solid controls, and a nice screen. Inside is a custom AMD CPU, an AMD Van Gogh GPU, and 16GB of RAM. It’s not a high-end gaming rig. It’s not even an Xbox or PS5. It is powerful. Of course, all of that compute power costs in electrical power, which means that battery life is not great. 15 years ago, I’d say the battery life is great, however, in 2022, we’ve gotten used to Laptops, tablets, and phones that are all very powerful, and also have all-day battery. Stay near power (battery or wall-charger).

That power also gets converted to heat, and the Steamdeck has fans. Get this thing cranking and the fans kick in, and you have a nice stream of heat from the top vent. It won’t keep you warm in winter, but it is noticeable.

There is a single USB-C port that charges the unit, and provides USB-C connectivity to external peripherals. I’ve connected the Steamdeck to my monitor via USB-C, which has a USB hub to connect to a camera, microphone, keyboard, and trackpad, in addition to the monitor connectivity. I’ve also used a USB-C hub to ‘just’ connect a keyboard and mouse. You can also connect to peripherals via Bluetooth.

The size: It’s large! However, it’s not as large as I thought it was going to be. It’s about double the size of a Switch, which makes it a little less likely (for me) to throw in a bag and go. For me, this is basically a stay-at-home machine.

I don’t have a history of buying gaming hand-helds. When I heard the Steamdeck was going to be “hackable”, is “just a PC underneath”, and, “runs Linux”, though, my interest was piqued. Can I use it as a general purpose PC?

When “developer mode” is enabled, the Steamdeck’s SteamOS offers a “Switch to Desktop” option that reveals a Linux Desktop. 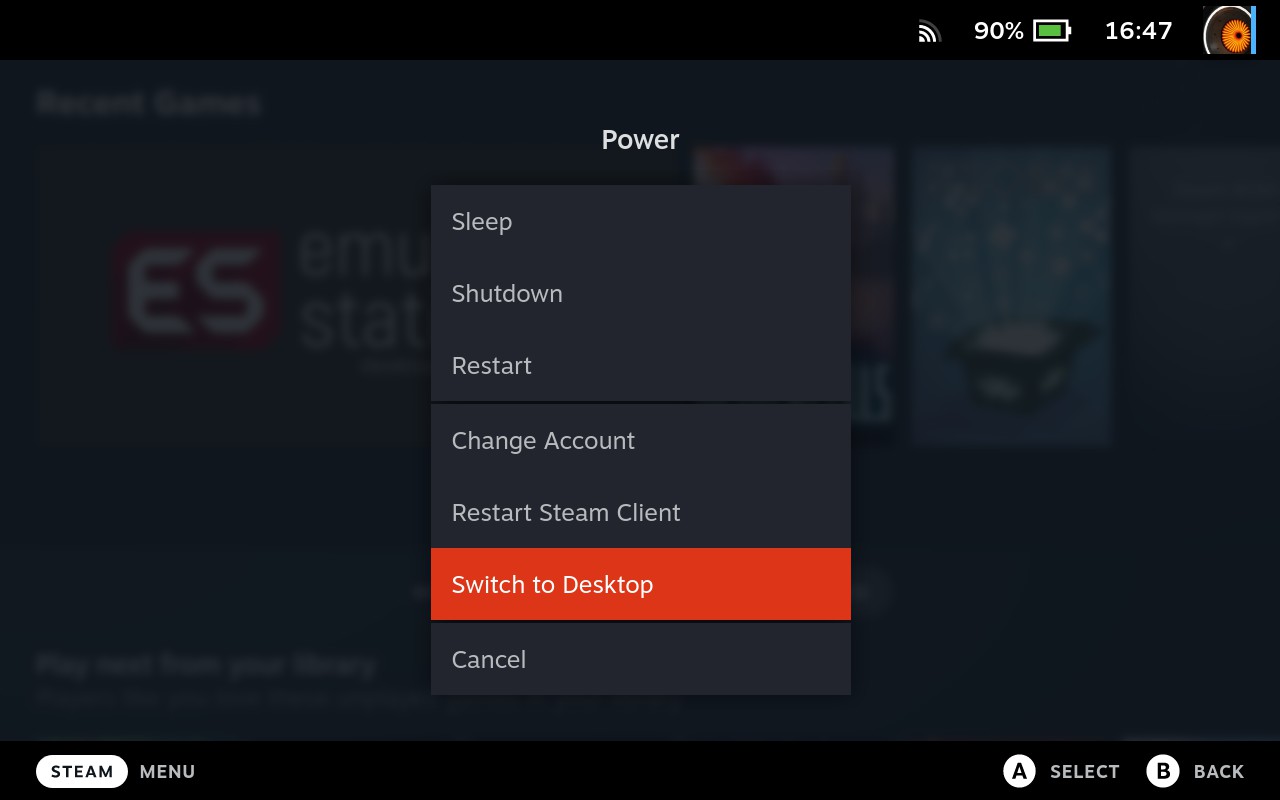 SteamOS brings you a modified version of Arch Linux, and it’s pretty open. It does identify itself as “SteamOS”:

You can even get a shell. 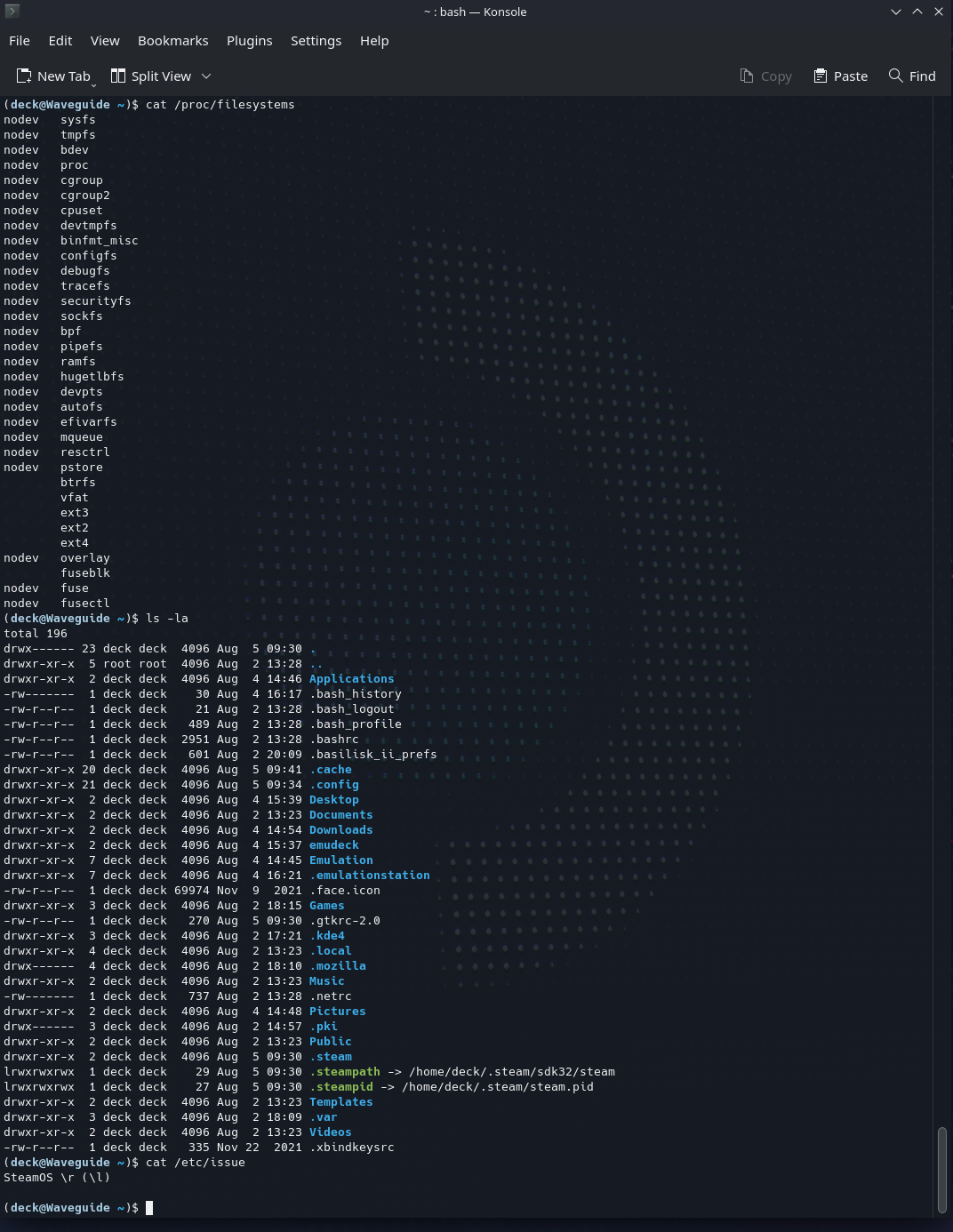 This image is nice and tall, thanks to being plugged into an external monitor at the time.

The integration here is still a little rough, and not everything works as you may expect. For some things to work, you’ll need Steam running (which it is by default).

To get much done here, you’ll want an external keyboard, as the on-screen keyboard takes up too much space to keep the display useful. It’s also not the best experience to type on. Once on-screen, you can use both trackpads to type: the left trackpad has a cursor that reaches only the left-hand side of the keyboard, and same for the right trackpad. It took me a short time to get get used to, but you can start to move quickly with it afterwards. That said, the on-screen keyboard has no meta or special keys, so popping open terminal can be an incomplete experience.

That said, to get my screencaps off of the Steamdeck for this post, I ran a webserver using the built-in Python, and downloaded them to my iPad. 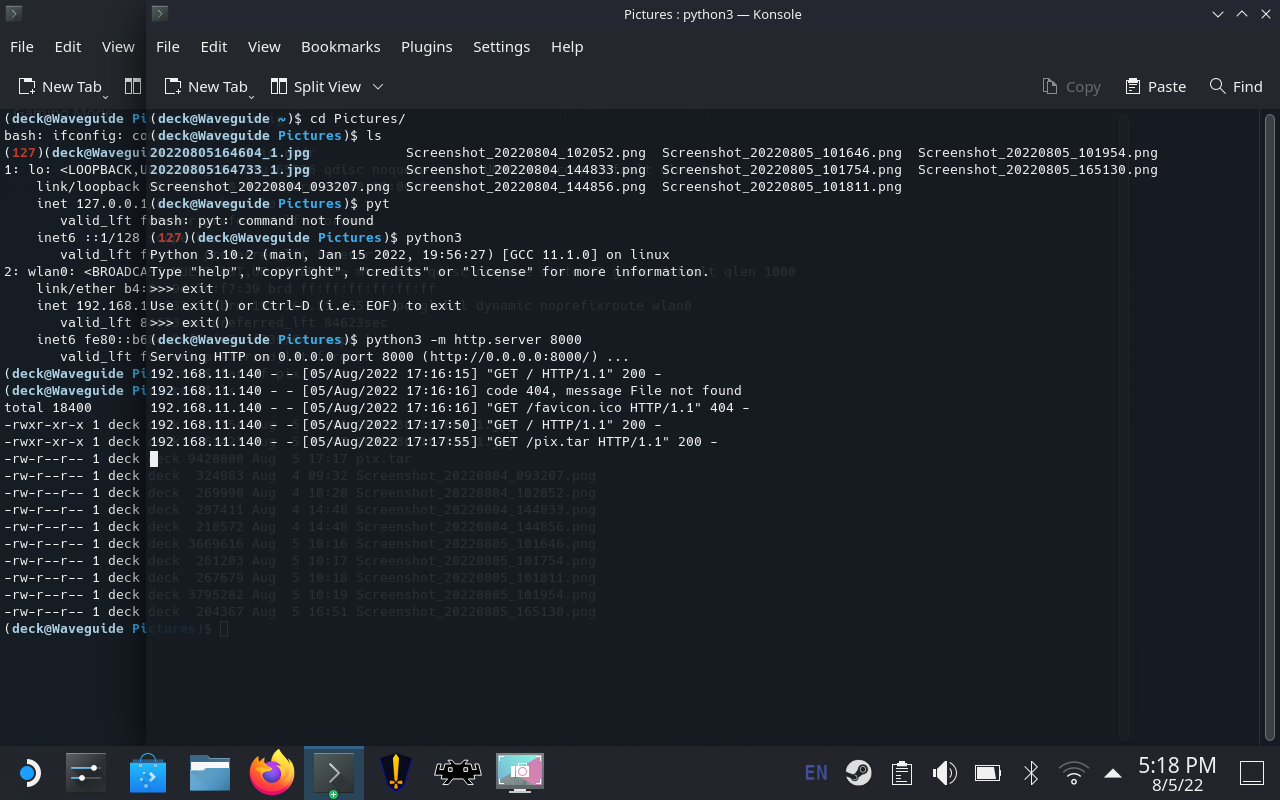 There may have been a better, easier, or more official way of accessing and retrieving these screenshots. But hey! I haven’t used ssh or Python from a gaming hand-held before. At least, not in its stock and shipping state. (Aside: screen captures are stored in two radically different places, depending if you take them while using SteamOS or the desktop environment.)

If you access the Desktop, you’ll notice that it’s running KDE, and has most of the familiar KDE apps built-in: Konsole (terminal), Dolphin (Finder/File browsing), Discover (App Store/package manager), an updater, and more. I’m not quite sure yet how updates are packaged if you don’t use Developer Mode and access the desktop, but KDE seems to always have something to update. 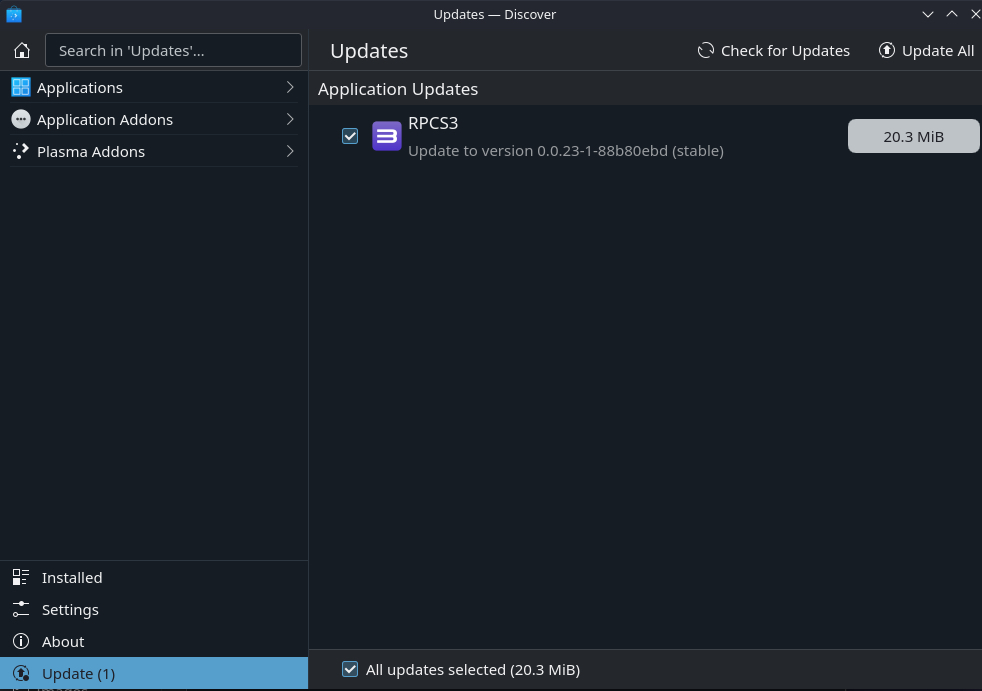 Sure. …depending on what your “work” is. You can get a shell, and it has ssh built in. That’s 90% of my use case, and I could certainly get “personal work” done. Firefox is present in the default config, and there’s a Flatpak for Chrome. Depending on the security stance that your actual work requires, it’s unlikely that you can use a hardware security key, or that the Steamdeck will pass some of the other conditions. The intention is gaming, so, there’s no data encryption at rest, and there’s an optional SD card for storage, which can easily “walk”. If that’s your gaming data, it’s probably no big deal. If it’s work data, that’s not great.

Even if I could use it as a general PC, its portability for me is limited. In addition to the Steamdeck itself, you need a USB hub, a keyboard, and power at bare minimum.

The point of this thing is gaming, right? Yes! The Steamdeck comes through in that regard. Turn it on, perform an initial sign-in to Steam, and you get your entire Steam library. The Steam interface is pretty good about marking games that have been tested and “verified” for the Steamdeck, those that are questionable, and those that just will not work.

For my uses, I’m using this modern wonder to play 30+-year-old games. Via Linux, I’ve installed MAME and other emulators (including Vice!), and can access those through the main Steamdeck interface (not in “Desktop Mode”), which is pretty cool!

The Steamdeck succeeds at what it tries to do, while also providing power-user features. There are new updates every day that make the experience better and more polished, such as new controller mappings, updated games, and better integration for Desktop Mode. As an open PC, you can also install any x86-64 OS that you like, including Windows, which apparently has official drivers for the Steamdeck now. There’s even an easy way to factory reset the entire device for when you inevitably back yourself into a corner by trying to push the power-user envelope.

The real question is: knowing what I now know, would I still want to end up with a Steamdeck. For me, the answer is “yes”. It’s an incredibly interesting device. I no longer have a Windows/gaming rig, so it does fill that void. I’ve had some games that I couldn’t get to for a while as I didn’t have the platform on which to play them.

One small frustration for me is that my iPad is powerful enough for all of this. If Apple would allow emulators on iPad OS, the equation would change significantly. That said, one can use Steamlink to play Steam games on other platforms while physically away from the Steamdeck.